Visit
There is so much to do near Main Street in Boonton, NJ.
Browse our list of attractions to plan your next visit and get directions! 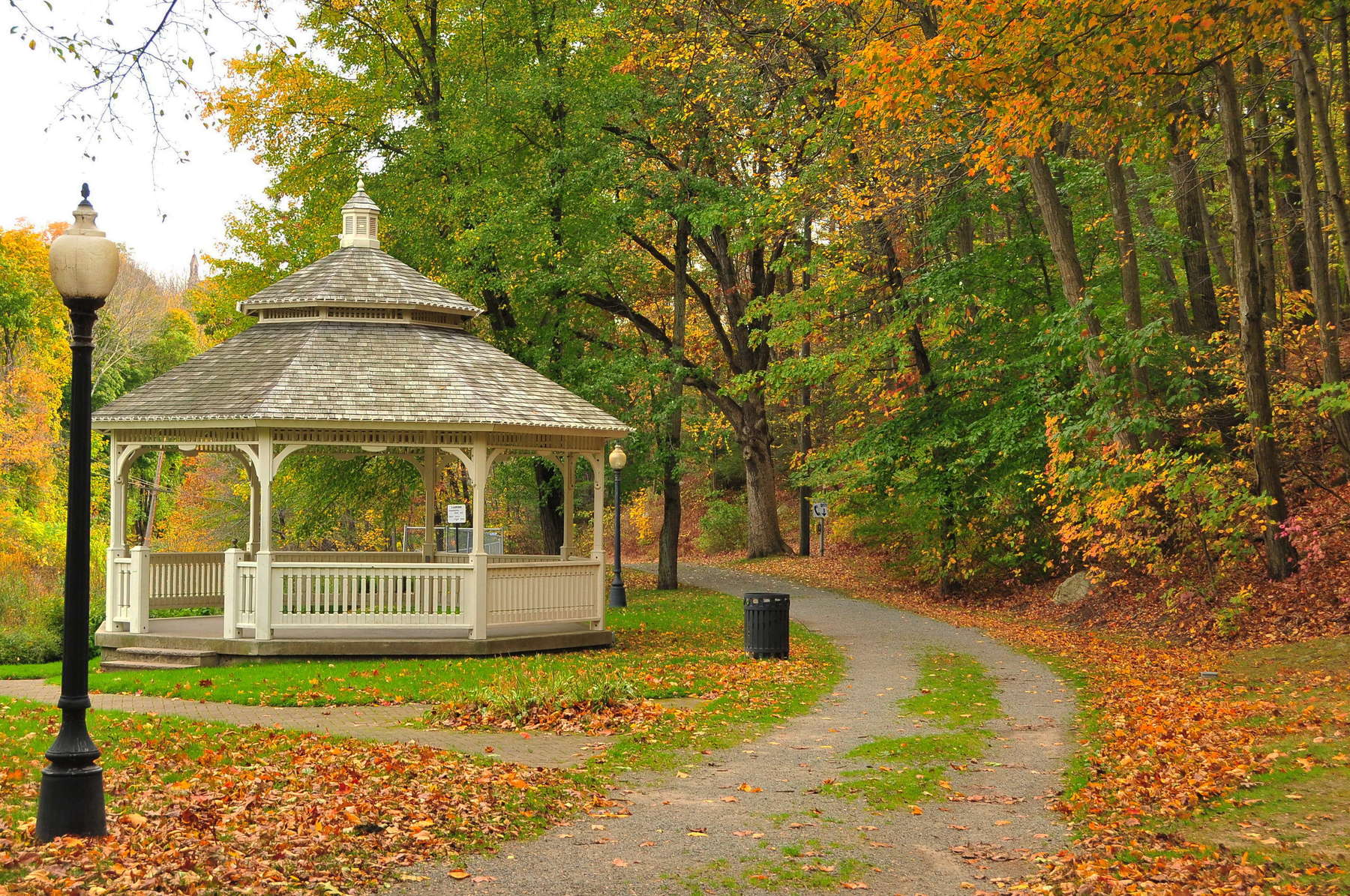 Located along West Main Street at the northwestern edge of the Town of Boonton lies Grace Lord Park, on the outer edge of the Park section of Boonton, a residential area designed by Frederick Law Olmsted, who with Calvert Vaux created Central Park in NYC’s Manhattan in 1857. The park’s entrance area offers a delightful children’s playground, a gazebo for staging summer lawn concerts, and benches overlooking the river’s bend. Beyond the gazebo a trail takes you east along the cascading Rockaway River, where a roaring 25’ cataract tumbles downstream. Some 300 yards further you cross the river upon the picturesque Arch Bridge.

This stretch of the Rockaway River with its falls is the genesis of the town. Recently installed interpretive panels, located at the trailhead tell the story of the region’s growth and development catalyzed by the opening of the Morris Canal and the Boonton Iron Works complex, ushering in a vibrant era of the iron industry in Boonton and in other towns along the Canal in the iron-rich New Jersey Highlands. The trail takes you along and across the river, where a challenging climb brings you up the other side to the Canal Side of the park offering picnic tables and basketball hoops, with plenty of space for exercising dogs with a ball. While the trail loop is of modest length, it offers a delightful variety of options. Choose to fish for seasonal trout along the river’s bank, carefully descend to sit mid-stream upon a large boulder surrounded by swift rapids, or linger to munch lunch above the roar of the falls. Whichever option you choose, a visit to to Grace Lord Park and Boonton’s Rockaway River Gorge will have you returning for a pleasant reprise. 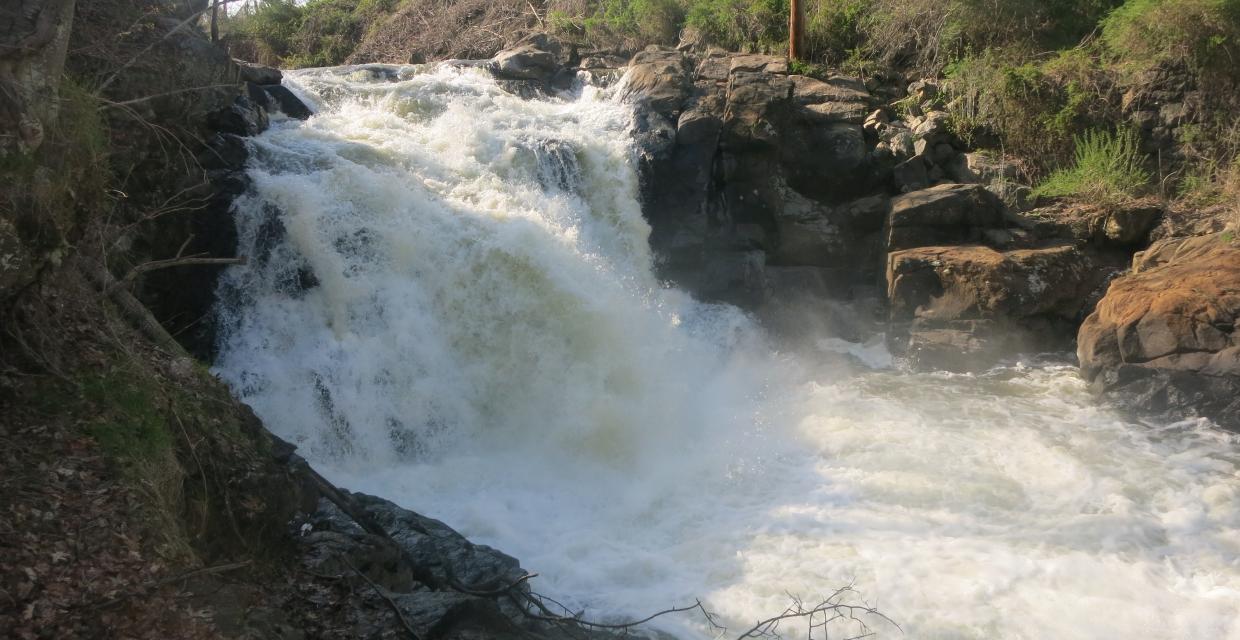 A “must-see” site, awesome in its beauty and power, the presence of the falls is the very reason the town came into being. Paralleling Main St. 80 yards beyond its stone wall is the 25’ drop in the Rockaway River that creates the Boonton Falls. When the planners of the Morris Canal routed the eastern half of that vital channel of transport along the Rockaway River, the water power generated by the falls and the steep gorge through which the river races became motivation for the New York Iron Co. to build New Jersey’s first iron foundry here. From the foundry’s employees came growth in the area’s population and the ultimate founding of a municipality in 1867.

Access to view the falls is gained by walking the short trail to the right of the gazebo in Grace Lord Park, Main St. & Essex Ave. Continue walking beyond the falls and across the picturesque Arch Bridge, and walkers may turn left to proceed 60 yards up the opposite bank for a full downstream view of the falls while their ears absorb the sound of their power. 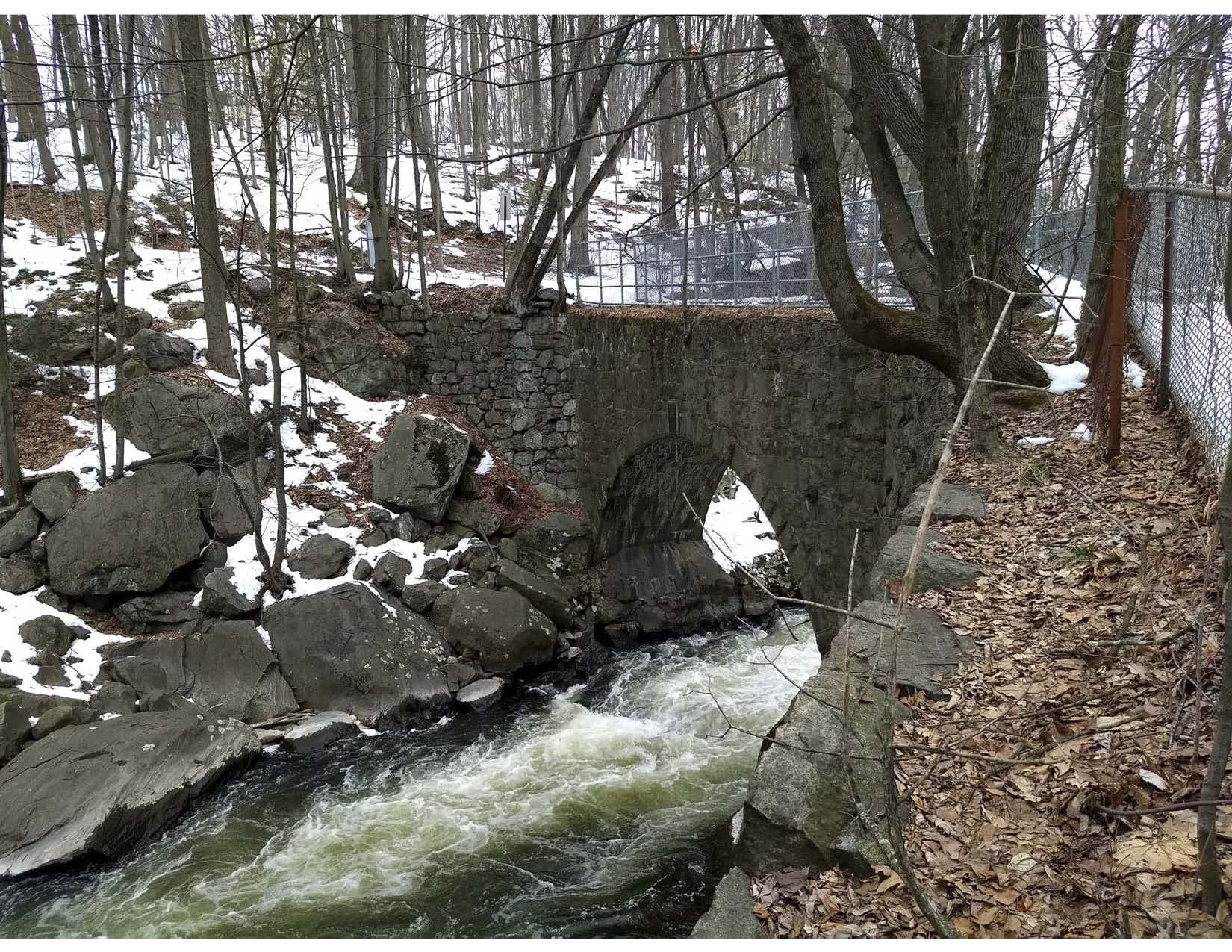 Even before Boonton had established its identity as a town, while yet a part of Pequannock and Hanover Townships, in 1860 the nationally-known Harper’s Weekly, with a circulation of 200,000, declared: "The village of Boonton is beautifully situated — so far as charming prospect is concerned — upon the almost precipitous face of a bluff, which forms one of the sides of a deep ravine through which the Rockaway River empties its waters into the plain below.” 160 years later, the chief architectural feature of that magnificent gorge can be appreciated while experiencing the still-powerful cascading river.

The impressive stone structure was built in 1866 as a viaduct to provide fire protection for the Boonton Ironworks. Builder John Carson Sr. was a Scottish stone mason who reportedly built many of the original masonry buildings of the adjacent foundry with stone brought from Mt. Hope. The keystone on the downstream side bears an inscription with the letters “FL,” along with the date, believed to stand for Fuller & Lord, one-time partnered owners of the foundry. The Park section of Boonton, immediately west of the river, was initially populated by wealthier residents, many of whom were foundry management. Thus the viaduct’s creation may likely have also become a more direct footpath to the iron works. Reached by walking 200 yards along the trail to the right of Grace Lord Park’s gazebo, the picturesque bridge is the only intact portion of the ironworks remaining, now functioning as a pedestrian bridge and overlook for the Boonton waterfalls. 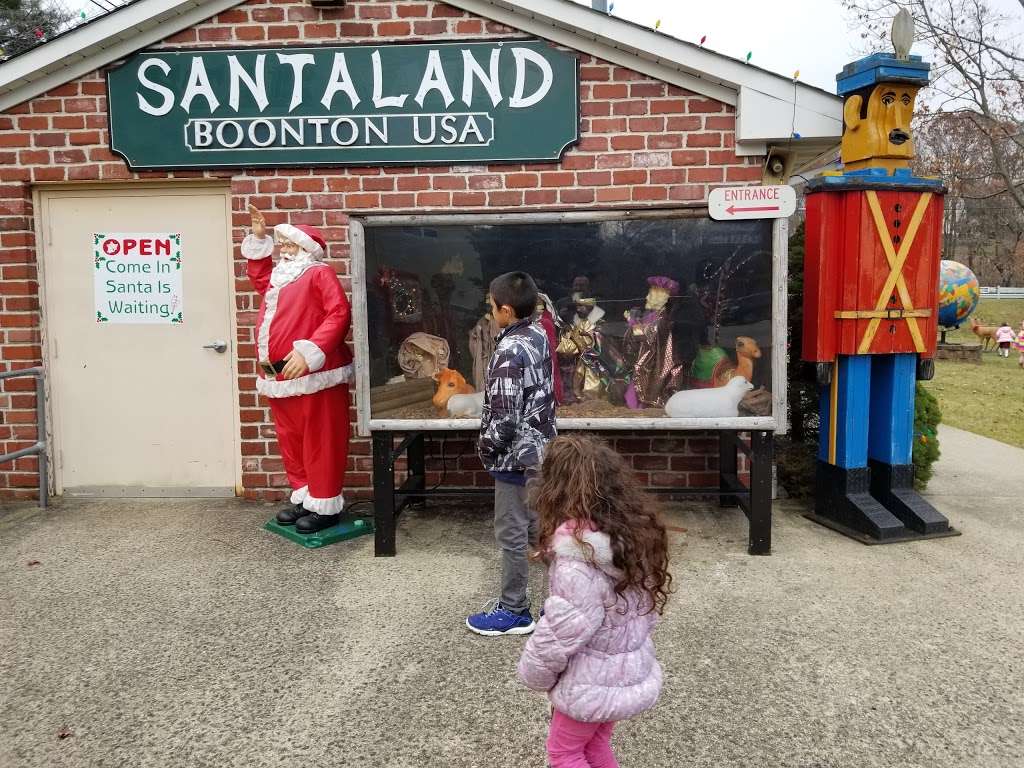 Kids in every town are not as privileged as Boonton’s to have Santa Claus hold regular visiting hours for Christmas gift consultation right here in their own backyard, each of four weekends following Thanksgiving! Boonton’s Santaland has been a traditional pre-Christmas presence since 1963. Beginning first with an outfitted trailer stationed in Grace Lord Park erected by the Town Street Department, the operation was moved across the W. Main St. bridge to its current location beside the Water Department on N. Main St.

There, in conjunction with the town’s first Christmas Parade in 1994, the Boonton Volunteer Fire Department erected the present brick structure, with Santa offering children regular visiting hours of 5-8pm, Fridays and Saturdays and 2-6pm on Sundays. The building’s interior offers engaging Christmas decor to occupy attention as kids wait their turn to sit on Santa’s lap. Santaland is the terminus of the annual parade staged the Saturday following Thanksgiving, when bands, floats, public service vehicles and marchers precede Santa up Main St. There, as seasonal refreshments are served in the parking lot to parade participants and observers both, Santa Claus begins the weekends of consultation with each child who visits. 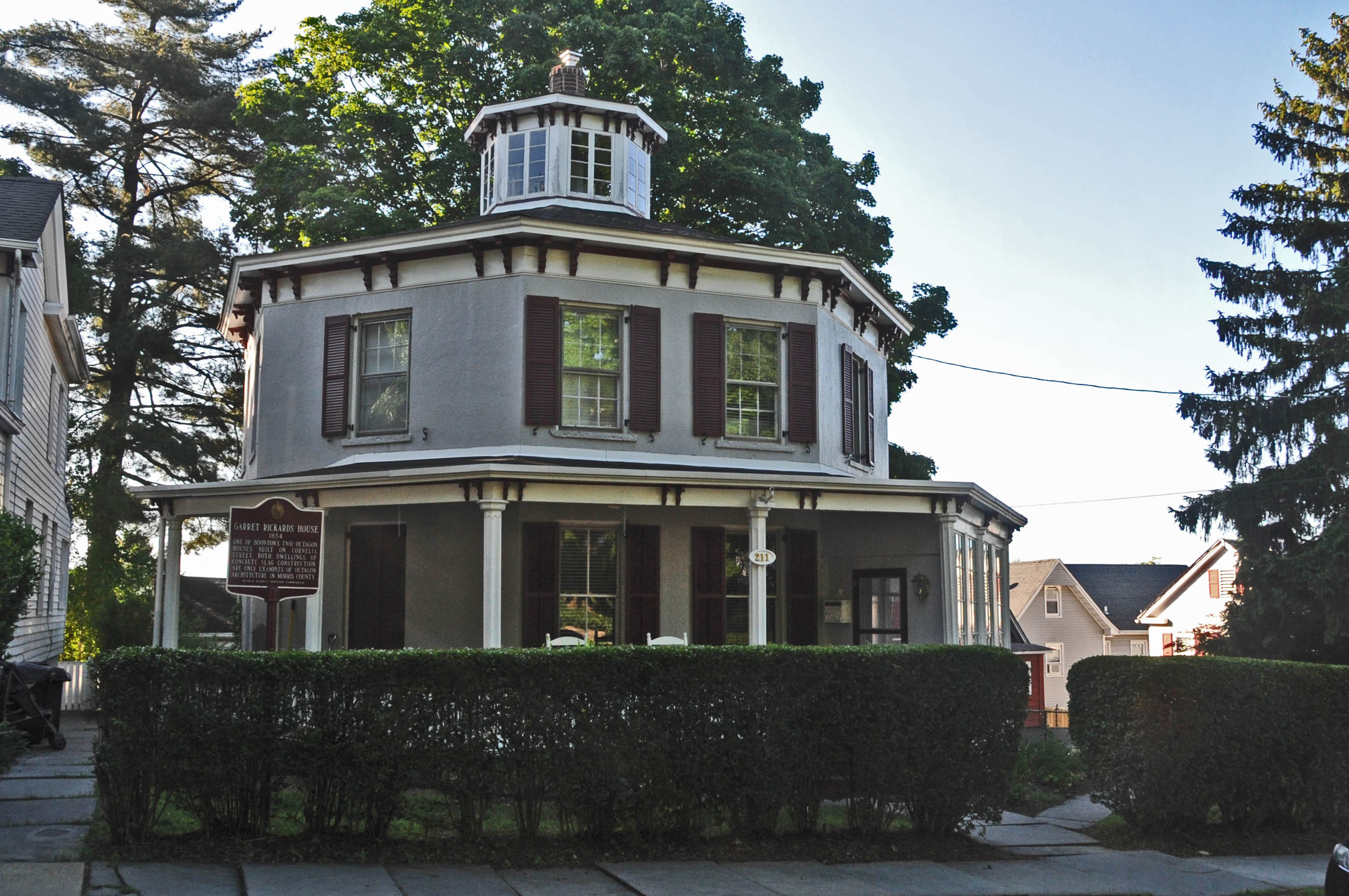 Eight-sided dwellings are not the usual exterior shape chosen by home builders. Yet Boonton offers two of the seven found in New Jersey in one block Cornelia Street, 211 & 224 Cornelia St! Two employees working in the Boonton Iron Works journeyed back home to upstate N.Y during a 2-year recession, where they were introduced to the concept. Convinced of its merits, Garret Rickards and Nathaniel Myers returned to Boonton when the economy recovered and both built octagon houses, Rickards #211 in 1854. The structural design is a mid-19th Century concept of O. S. Fowler, who believed it more efficient, practical and healthful, as it uses less heat, lets in more light, and wastes less space on hallways as all rooms radiate from the center.

A major feature design was a central core running from the basement to the top of the house. Inside this core were a stairway and plumbing, including a real novelty — an indoor toilet! On top of the core was a glazed cupola to bring in daylight. Nellie and Ken Simms occupied the house for over 50 years until their deaths, when it was bequeathed c. 2005 to a grandson. As had the Simms, their grandson retained the original octagon exterior when doing extensive restoration and updating inside. (Interior improvements to #224 called for the rear walls to be reshaped as square.) Fowler’s original design called for gravel to be used in the exterior’s concrete mix. However, Rickards and Myers choose the plentiful iron slag available to them — perhaps the reason the walls have never experienced cracks! 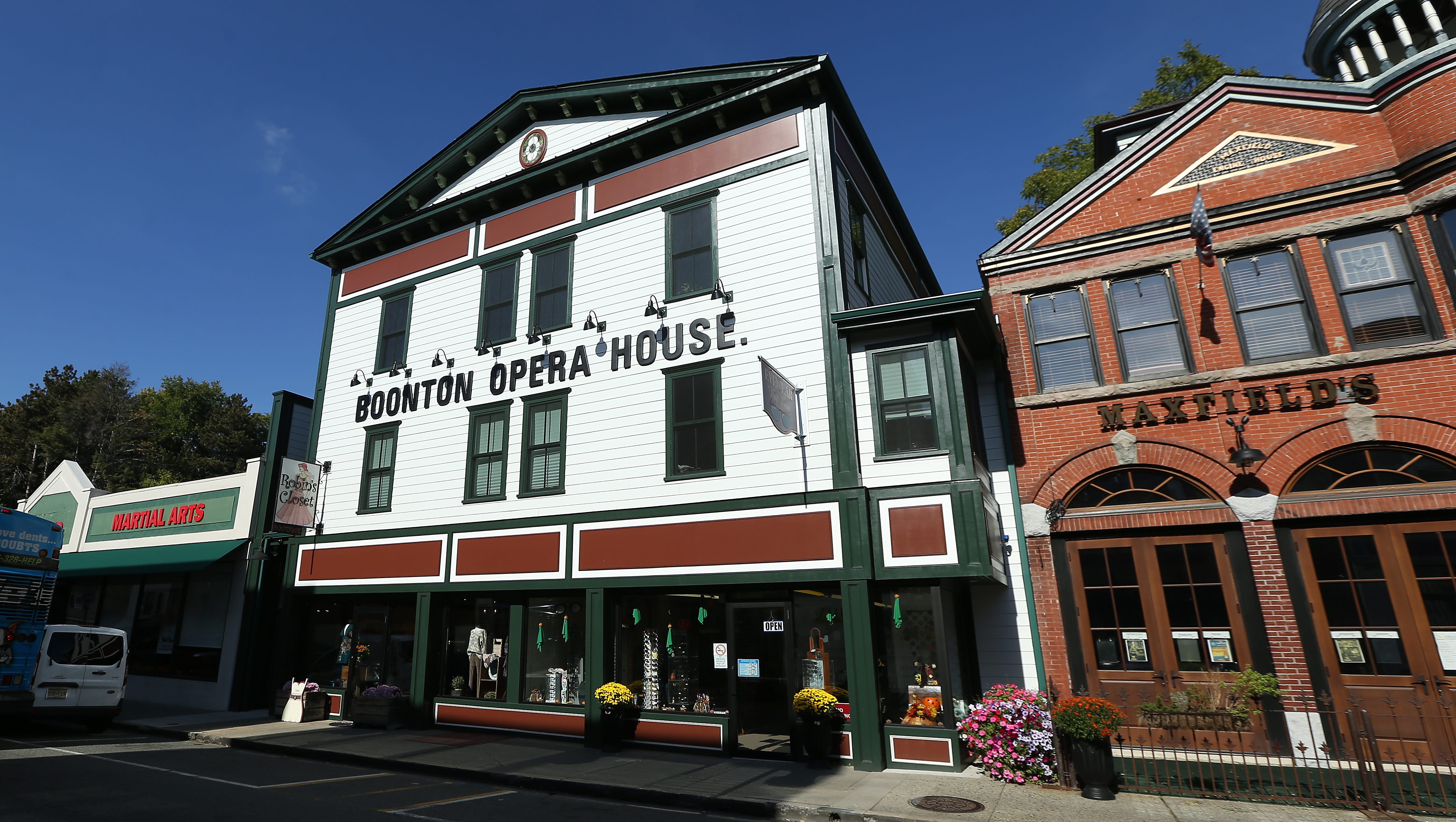 Built in the late 1840’s, the Boonton Opera House was originally just two stories consisting of a large meeting room over several stores. By the 1860’s, the meeting room was known as Independence Hall, where the Temperance Society fought the social ills of the day and Boonton’s own National Guard practiced its military drills. In 1890, the roof was raised and a third floor was added. It was given the impressive name of Boonton Opera House, operated by Mrs. Sarah Green. The third floor was a rather grand room with 19- foot ceilings and a raised stage that covered a cistern used for fire-fighting purposes. Musicals and stage productions, comedy and vaudeville were staged here for the townspeople. When silent films came along, the building was given still another name, The Bijou Theatre.

To both expand their personal business investments and restore the grandeur of some historic local architecture, in 2012 Ann & Pat Cox, owners of the popular Heavenly Temptations cafe and gift shop across the street, purchased the property with the hopes of putting it back to good use, renovating it while retaining its unique features. The original entrance to the meeting hall was an exterior stairwell to the right of the storefront shops. The Coxes moved it to the left, and added a second floor entrance from the current municipal parking lot behind. Along with two rental apartments, the greatest portion of the top two floors offer an open-floor design for a business, retaining the stage upon which its employees can perform musically. The high wooden ceiling has been restored to allow appreciation of its original uniquely curved corners.

The new interior may be viewed by visitors discreetly climbing the entrance stairs and walking to the back parking lot through the hallway, where a marvelous mural depicts various historic iterations of the Opera House as well as other historically significant buildings in town. 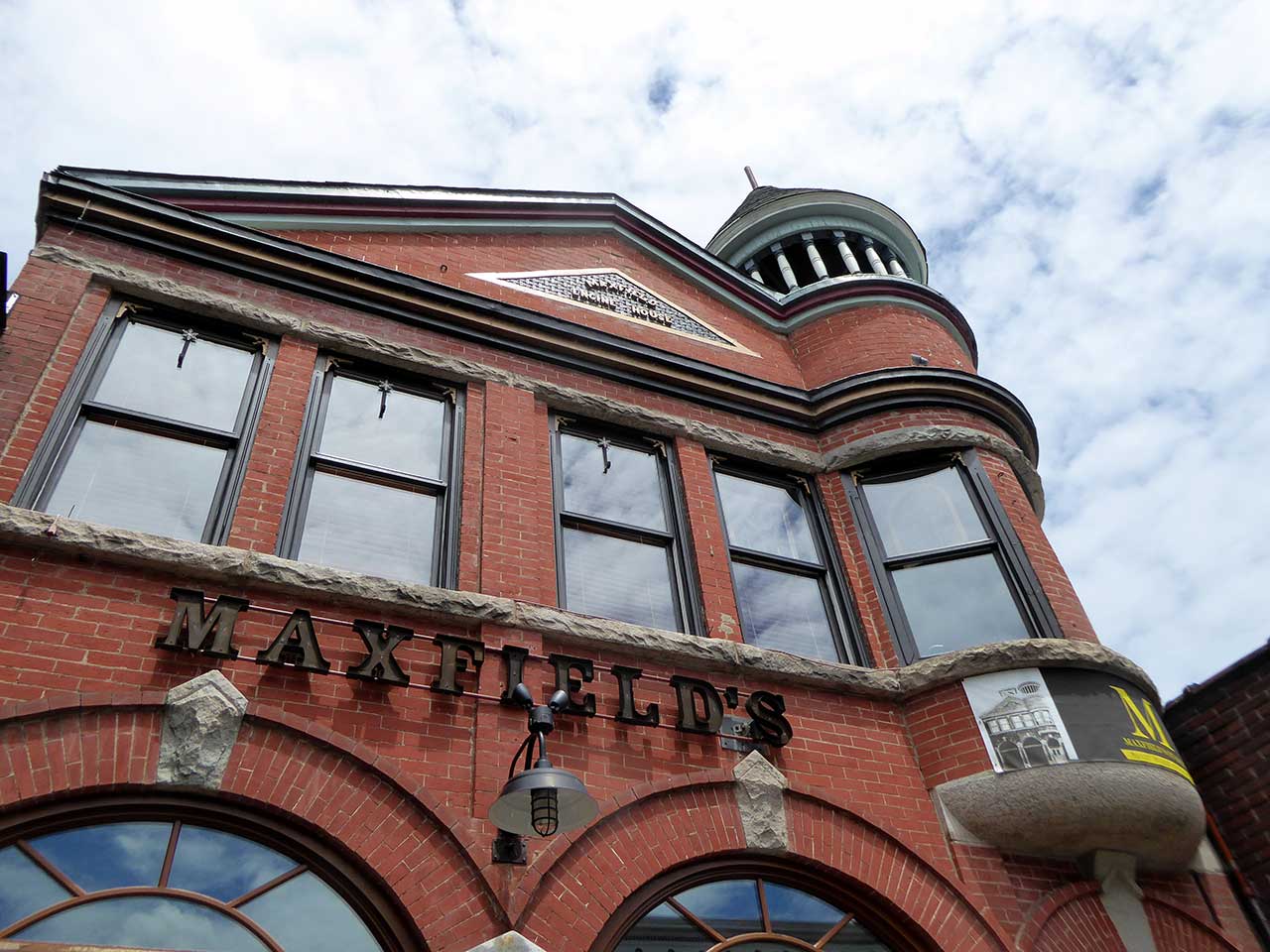 That standout architectural edifice of red brick with a turret at #713 in the middle of Boonton’s Main Street business district is the town’s original fire house. Following years of haphazard efforts to fight fires throughout the growing town, the volunteer Boonton Fire Department was organized in July of 1891 under the leadership of Mayor John L. Kopp. The town passed several ordinances describing the companies, equipment and facilities that were to be established.

One ordinance provided for the construction of a firehouse on land donated by John Maxfield, who lived next door where present-day Roma Pizzeria is now. The building has served several functions: fire station, 2nd floor meeting hall, police station and jail (an iron barred cell door remains on the 2nd floor); and in 2012 underwent restoration to become a bar hosting live jazz and catered events. Currently vacated, the building recently has been purchased by an owner intent upon doing intensive historic restoration to become a venue for the arts. 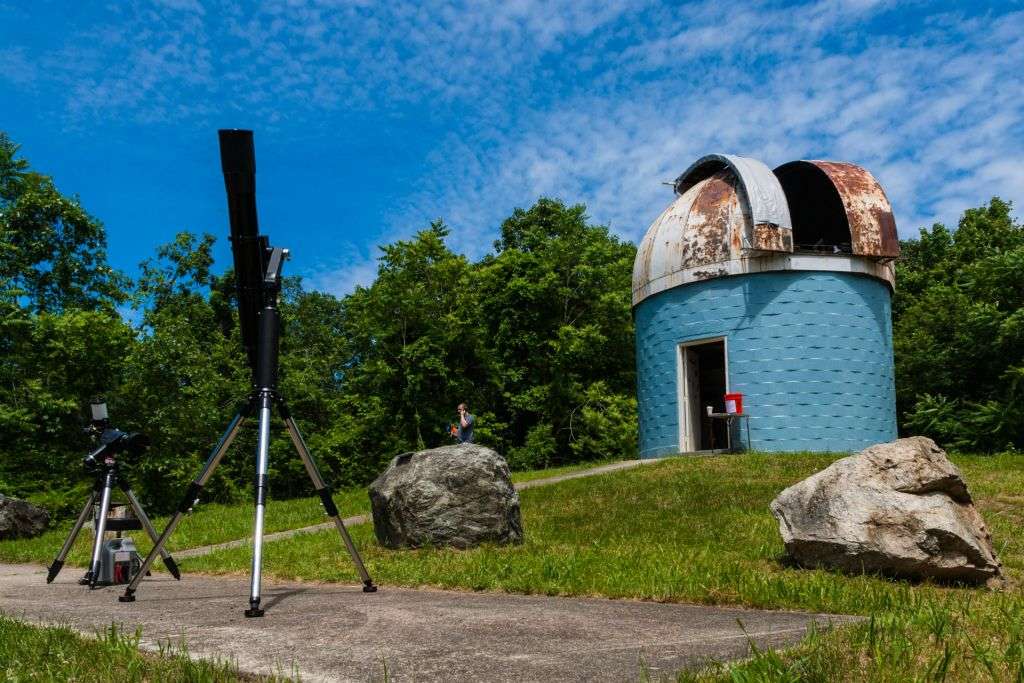 SHAA began in the mid 1960's as the Booth Astronomical Association, named after Les Booth, a former Boonton High School principal. Booth taught night classes on astronomy and after he retired, his former students got together with him and formed the organization.

The group remains dedicated to public outreach, sharing their knowledge and outstanding views of the night sky with the public. 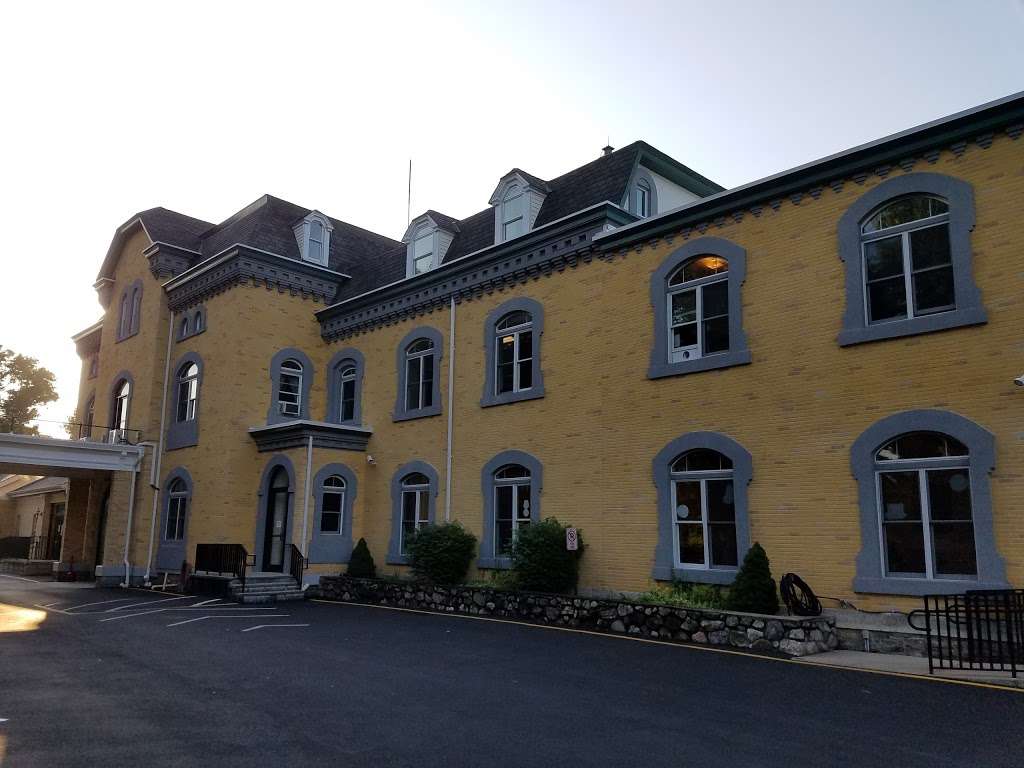 Located on the historic Lathrop Estates in Boonton, The New Jersey Firemen’s Home – established in 1898 – is the ONLY licensed health care facility in the State of New Jersey whose primary mission is dedicated to the men and women of the New Jersey Fire Service. – providing both long term care and residential health care services. The home was established in 1900, two years after the state purchased the acreage and the 150 year-old Lathrop mansion. The facility can house 84 “guests,” as they are called. Any retired or disabled fireman/woman can apply for admission to the home.

Several other buildings have been constructed in the years that the home has been in operation, and each is in use daily. If a guest is not in the dormitory, she/he can be found in the library, perhaps, or the clinic, chapel, recreation room or dining room. There is also a special arts and crafts center. The Firemen's Home also houses an 8,000 sq. ft., two-story museum, which opened in May 1985. Steamers, ornate hose carts, and fire trucks are among the many items on display for all to see. The New Jersey Firemen's Home Museum is opened daily 8AM to 4PM, and admission is free!